About the author of From This Cloth

I began doing traditional weaving in June 2015 and added it to my orgiami, card making, knitting, crochet, beading and chainmaille... because you can never have too many hobbies!

Because I learn best by trying to explain things to others, this blog will be partly about my weaving and partly me explaining things I've learnt as though I know what I'm talking about! I hope you find it helpful in your own weaving adventure.

Weaving drafts can be a bit brain bending at first, because all you see is a graph without any words. Also, because the little coloured boxes in the draft mean different things depending on which part of the draft you’re looking at! Once you get the hang of them though, they are a great tool.

So, let’s start with a draft for some basket weave, and imagine you’re sitting at your loom looking at this cloth; the bottom edge of the diagram is your cloth beam and the top edge is your fell line.

Because it’s basket weave it goes over, over, under, under:

To create this over, over, under, under structure we need two shafts with pairs of threads alternating between shaft 1 and shaft 2:

So this part of the draft is your threading guide, with the black boxes indicating which warp thread goes on which shaft (for a rigid heddle loom, what goes in slots or holes).

How do you know which lever to press to raise, say, shaft 1? This is shown in another set of boxes to the side of the threading guide and is called the tie-up:

Here a black box indicates which shaft is tied to which lever or treadle. (With rigid heddle looms these are the up-shed and the down-shed.)

Finally, we need to know which lever / treadle to use for each pick of weft, so in the third set of boxes – the treadling order – a black box indicates a lever: 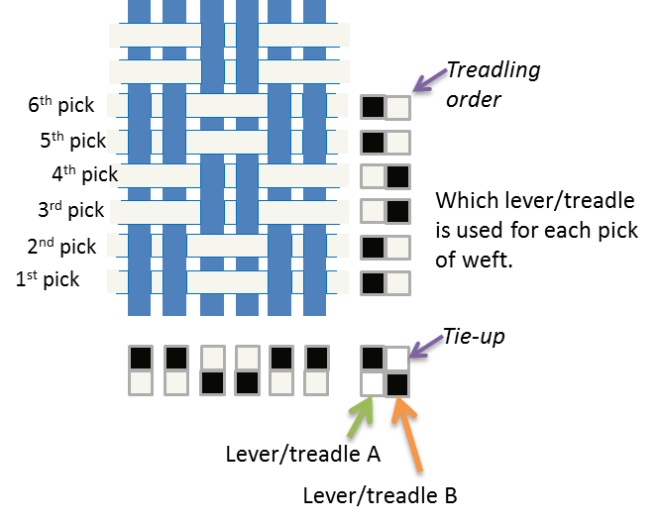 And this is what the final draft looks like:

The big area in the middle is called the draw-down and shows how the threads interlace. This isn’t always included.

Nor are the two sets of coloured boxes along the outer edge that show the colour order for warp (bottom) and weft (side) always shown.

One final note: In this example I’ve shown the threading guide and tie-up at the bottom of the draft, but you often see drafts where this sits at the top. The only difference when a draft is laid out like that, is you read the treadling order from the top to bottom rather than – as here – bottom to top.

In another post I’ll look at other ways that weaving patterns are written.